What IS the Sport of Barn Hunt?

Barn Hunt is a relatively new sport, that is rapidly gaining in popularity. It is a timed event that tests your dog’s ability to search (hunting) and mark (finding) vermin (rat) in a barn-like setting; but not necessarily in a barn. 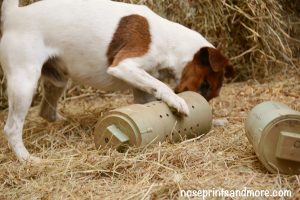 In the sport of Barn Hunt, there is a simple course of hay/straw bales, designed by a Barn Hunt Judge, with PVC tubes hidden in the hay/Straw Bales containing live rats. The dog must climb on a bale with all four feet, go through a tunnel built out of hay/straw bales, and alert the owner to the hidden rats, all within a specified amount of time based on the level.

Barn Hunt is mostly a game of instinct, but the best dogs bring an element of basic training and self-control to succeed. The dog/handler team that completes the required elements (climb, tunnel and finding all the rats on the course) qualify and earn ribbons. While dogs, or those who aren’t interested in finding the rat, still get to be shown the rodent at the end and can try again next time.

An essential skill is the ability to notice your dog marking the find, the signal, which could be as subtle as a flick of the ear or as obvious as pawing and barking at the found rat. Barn Hunt has some similarities to nosework, scent detection, or search and rescue activities.

Barn Hunt is not regulated by the AKC. In order to participate in a trial, dogs must be registered with BHA. You can register your dog online at www.barnhunt.com. The BHA website also provides the history of barn hunt, levels of competition, rules for trials, and titles earned by breed.

To attend practice/training sessions, you do not need to be registered.

A Little More About the Sport

There are currently 5 levels of Barn Hunt test: Instinct (RATI), Novice (RATN), Open (RATO), Senior (RATS) and Master (RATM). Each level tests the dog’s ability to locate one or more rats contained within PVC tubes. With the exception of Instinct, the tubes are hidden in hay or straw bales. Empty tubes and tubes containing soiled bedding litter from the rats are also used. The dog must identify the tubes containing the rats and ignore the empty or bedding tubes. The handler’s job is to recognize when the dog has alerted on the rat. The dog must also negotiate a tunnel built out of hay bales, and execute a “climb”, getting up on top of a bale, with all four feet, at least once. At higher levels the climb is required as the tubes are often hidden two or three bale levels high. Ramps are placed on the course which are used by many small dogs, often used by older dogs or dogs that find it difficult to jump and climb.

The Instinct level course is always the same course. There are 3 tubes, 1 rat, 1 bedding, and 1 empty out in the open. You have 60 seconds to locate the rat and indicate it.

After instinct, the courses vary depending upon the judge, level and location and the tubes are hidden.

Novice courses generally consist of 20-30 bales, maximum 2 bales stacked high, with a short straight tunnel. In Novice, there are 3 tubes, 1 rat, 1 bedding, and 1 empty and you have 2 minutes to complete the tunnel, climb and find the rat.

Open level is very similar to Novice. An Open course consists of 20-30 bales, maximum 2 bales high, with the tunnel having 1 90 degree turn. In Open there are 4 tubes, 2 rats, 1 bedding and 1 empty and you have 2.5 minutes to complete the tunnel, climb and find the 2 rats.

Senior level courses have 35-60 bales, maximum 3 bales high. The tunnel is more difficult, containing 2 to 3 90 degree turns. Senior has a total of 8 tubes, 4 rats, 3 bedding and 1 empty. You have 3.5 minutes to complete the tunnel, climb and find the 4 rats.

Master level courses, consists of a minimum of 50 bales of hay. How many rats is a lottery and can be any number from 1 – 5 rats.  The course has a total of eight tubes. So if you have 1 rat there will be 7 bedding tubes; if you have 2 rats there will be 6 bedding tubes and so on. A course contains a mountain of hay bales with intricately turning tunnels with 2-5 90 degree turns. You have 4.5 minutes to complete the tunnel, climb and find the rats hidden on the course.  You have to tell the judge when you believe that your dog has found all the rats and completed the climb and tunnel elements.

At all levels, tubes may be hidden anywhere in the test area from on top of the stacks of hay to under a handful of loose hay on the ground. And there is a time limit on each run.

And because there isn’t a lot of physical effort needed on the part of the handler, almost anyone can participate.

Learn more about the rules.